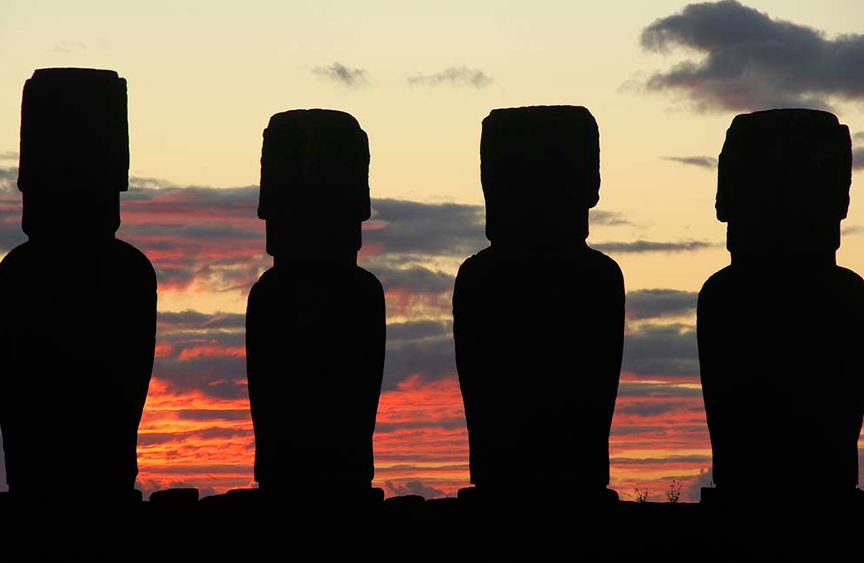 The Rapa Nui also felt the need to adorn the heads of the moai with the famous “pukao”. These massive cylindrical shaped topknots made with red scoria rock, were scattered near many of the ahu or platforms after the tribal wars which were carved out from a quarry known as Puna Pau.

Puna Pau:  We will walk around the trail surrounding many of the abandoned “pukao” or topknots were many of them have petroglyphs representing Polynesian canoes. You will learn the possible ways of how the ancient experts would erect these cylinders on top of the moai.  You will then reach the highest point of this small cone observing the red rock where they were carved out from and observe the amazing view overlooking the west area of the island.

Ahu Akivi:  the only seven moai facing to the ocean which are said to represent the first seven explorers to discover the island. This ahu was William Mulloy’s first restoration in the year 1960 and it is also said to be orientated astronomically.

Tahai:  Beautiful ceremonial site with three important Ahu or platforms with the only standing moai with its eyes on (not original eyes but it’s the original material-white coral) We will also see the only restored hare paenga (ancient boat house).

Recent Comments
Archives
Categories
Meta
I am the footer call-to-action block, here you can add some relevant/important information about your company or product. I can be disabled in the Customizer.
Get In Touch
Copyright Your Business LLC. 2022 - All Rights Reserved
Back To Top